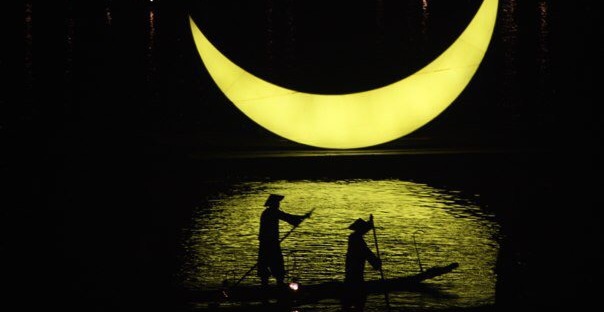 Original post: Saturday, October 25th, 2008, on a blog that no longer exists.

Last night we ate at a restaurant called “The Black Cafe” with our friends Andrea and Patrick. It is a restaurant geared towards allowing its patrons to step into the shoes of someone who is blind.

The first level is a bar called “The Visual Zone.” It has dim lighting, and is a comfy area to have a few drinks. It is also where you look at the menu, make your dinner selections, and stow your belongings in a locker, in anticipation of the mess you’re going to make eating in the dark. Once you have prepared yourself, you are led up a narrow and winding staircase to “The Dark Zone.”

When you arrive at the top of the stairs, you are introduced to your blind waiter or waitress, who leads you and your party choo-choo train style, through a dark curtain to your table. Each person is directed to their chair, and once all parties are seated, the waitress will tell you where each and every item on the table sits. Silverware, cups, water bottles, napkin. The meal is served as in every other restaurant, bread and drinks, salad, soup, main course, then dessert. Bill and Andrea had chosen the beef filet, Patrick and I, “the mystery meal.” Each course would be a surprise, but we were assured it consisted of items we had seen on the menu.

The evening consisted of plenty of feeling around the table and your plate. There was a water bottle and bread basket for Patrick and Andrea, and one for Bill and I. ” Is this our breadbasket?” “Where’s my beer?” “Oops, there wasn’t actually anything on my fork that time.” ” I’m trying to figure out if there is anything left on my plate.” “What are you handing me, Bill? Oh, another tomato…..I see that you can even sniff them out. No fooling you.”

The food was extremely tasty, and for those of you who are wondering, the mystery meal was the same as the others for the salad and soup, and the main course was a very pleasant surprise. Chicken, smoked ham, shrimp, beef filet with a convenient bone handle, veggies, and a potato. The only thing I couldn’t identify was in my salad, and may have been a mild piece of fish…….but I don’t want to know, nor think about it.

We adjusted to being in the dark, and even stayed around to chat after we finished our meal. Nothing was spilled, and they kindly supplied napkins that were much bigger than your average China napkin, which is usually a cocktail glass size, or tissue (literally). It was a great night, and we would do it again in a heartbeat. All in all, a great life experience!

Author’s note: Unfortunately, this restaurant has since closed for business. 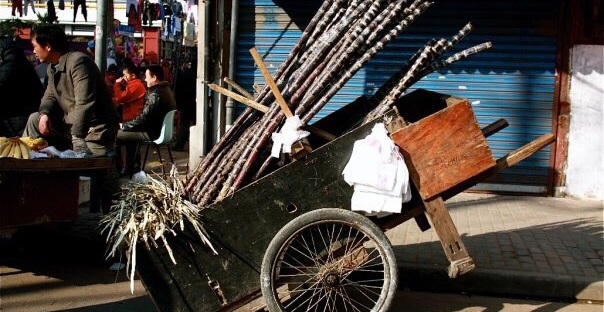 Although it’s more appropriate for a Throwback Thursday, today, I’m returning to one of my most memorable moments in Shanghai.  Where old and new, Asian and Western, and poverty and wealth collide.

Bill and I have spent the last few Thursday nights on the town, while the kids stay home with Ayi.  This past week, we had an errand to run before we went to dinner.

Bill is traveling to India in July, so we needed to turn in the documents for his visa. Once we arrive at the necessary office, they directed us to a side street across the road, so Bill could get the correct passport size photos taken. Mr. Tao parked the car, and he and Bill went to the “cubby hole”  which was the “photo shop.”

As I waited in the car, I watched the local activity, smacking myself for not having my camera with me. We were on a street that looked like we had teleported back in time to the 60s or 70s in China. Much farther in the States. We sat by an ancient two-story building, lined with doorway after doorway, only 10 feet apart. Older Chinese men and women, sitting in front of their homes, on bamboo chairs, sharing each other’s company, in the late afternoon sun. Beside one of the doorways, was a cabinet holding what appeared to be a number of family’s wares.  Next door, a gentleman closes up his “shop” for the day, putting away the homemade sign with a handsaw drawn on it. Taking down the worn kettles and pots that had hung on the wall. Upstairs, someone sits close to the open window, resting their elbows on the sill, and leaning out into the fresh air.

Two school boys walk up to the car, one staring in at the console. The other slapping him on the back and telling him, “Too expensive,” in Mandarin. They then walk to the back of the car, where I notice they are now looking at it from the rear. They are so entranced by the car that they have no idea I am watching from behind the tinted, rear windows. Our car is one of thousands of silver, Buick minivans which travel the streets of Shanghai everyday, but it would seem that none have ever been so close.

Once BIll and Mr. Tao return, we head to dinner, a mere five-minute drive from the small side street. The restaurant is one of about six or eight expensive, modern, and chic locations on the Huangpu River which runs through the city. They serve gourmet international cuisine and fine wine, with panoramic views of the cityscape. They spare no expense in dinnerware, furniture, or staff. It is a well-known and frequently visited location in the life of the wealthiest Chinese, and the expat community, but not one of the people on that side street that has endeared me today, could ever imagine.

Bill and I are early for our reservation, so we enjoy a glass of wine in the bar one floor below the restaurant, where we meet and chat with the owner of both.  She is Australian, and was the first to open a restaurant overlooking the river. She is directing her staff in rearranging the furniture. It’s early, so no other customers are there. Later, it will be packed.

Once we are seated on the terrace for our meal, we order a few starters of lobster and salad. When it is time to order our main course, I order “Veal Faggot with Sweetbreads.” I am initially deterred by the word “Faggot,” because I don’t know what it means, then decide it is probably just the way it is served, and veal sounds good, besides, “Sweet Bread” sounds delicious…..I like “sweet” bread. Bill goes with steak.

Before the meal arrives, Bill gets a “swimmer” in his wine, and we let the waitress know. I think she will get him a new glass, Bill thinks she will “fish” it out. BIll wins. She brings over a spoon, cloth napkin, and a new, empty, wine glass. She fishes it out, puts it on the napkin, tells him “good wine,” and asks him if he wants the clean glass. Meeting the owner already, I know she would not approve of this, but we let it go, chalking it up as one of the quirks of living in China. The waitress leaves, and Bill decides he doesn’t want the tainted wine after all, so I chug it down for him. The wait staff chuckle behind us at his facial expressions.

Our meal arrives and it is tasty, but mine has a funny texture, and where is the sweet bread?! I learn later, online, that the “faggot” was the giant meatball that was on my plate, and is made up of all the “extra” parts of the animal.  The other half of my dinner, which had a strange texture, but was fabulous, was the “sweetbread.” Not at all “bread,” but instead a dish made of glands from around the heart and neck. Who in their right mind would call this “sweetbread?!” Towards the end of our meal, fireworks start going off across the river, and the skyline is lit with the lights that make Shanghai, Shanghai.

Two different worlds, only minutes apart. Both scenes are beautiful. Both scenes forever engrained in my memory.

As Bill and I count down to our 25th anniversary trip, I am going to reflect on some earlier anniversary celebrations. The following blog entry is one of my mom’s favorites.

On Saturday night, Bill and I went to a restaurant called “La Villa Rouge” to celebrate our anniversary.  It is set in quaint old house, which was once part of a recording company. A park has been created behind it, where the record factory once stood, and at this time of day is scattered with older women doing Tai Chi, and children volleying balls around. We had the place to ourselves, as we were having an early dinner, with a table by a large window facing the park. It was the kind of restaurant where kids are not commonly seen, and you get a little bit of very tasty food, at a very steep price.

We ordered a bottle of wine, with no worries about who would drink how much…..a benefit of having a driver, and the couple who hardly ever drinks, finished it off. That would be a first in 18 years. Now if you had been the waiter, or the other two gentlemen standing at the desk, you may have thought I was drunk on my way to the ladies room. This impression may have begun to develop when the American girl (that would be me) came down the stairs and missed a step at the bottom of the first landing. Our waiter, being the gentleman that he was, put his hands out to try to catch me if I continued to fall. He was, however, still a flight below me. I steadied myself as I walked across the landing and then promptly stumble down one…..”I’m fine”………two….”Whoops!”…….three……”Honestly, I’m not drunk!” …….more steps. All the while, our fine, young waiter is standing at the bottom with his arms out, trying to save my ass. Each time I stumble, he apologizes. “Oh, saury……saury…….oh, saury!” Just for the record, they were shallow steps, and the back of my heel kept catching on the last one. I was not drunk! Just very relaxed.

After dinner, we went to the beautiful Shanghai Oriental Arts Center to see a Yue Opera. We were two of what appeared to be five westerners in the whole place, and better dressed than all but the cast. Apparently dressing up is not what they do for the opera in China. They had screens with English translation to the sides of the stage, but you could get the basic story without them anyway. It was the story of an army general and his wife, and there were several other male characters in the show, however, in the tradition of the Yue Opera, every one of them was played by a female. It was a fun experience, and the costumes were gorgeous.

After a romantic, child-free evening together, we arrived home happy, relaxed, and in the mood, so we climbed into bed………….pulled out the fifth season of 24, and watched four episodes. Perfect. 18 years.